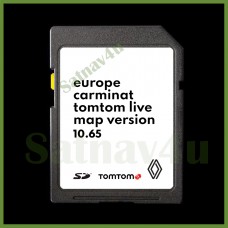 Condition: New
Area: All of Europe and UK

YOUR SAT NAV MUST HAVE LIVE SERVICE ICON/FUNCTION. PLEASE CHECK  my picture number 2

Compatible with the following models:

This SD-Card is brand new and has never been used.

I can guarantee the SD-Card has not been married to any car and can assure you it's 100% working perfectly.

The SD-Card will be sent without original box and brochure.